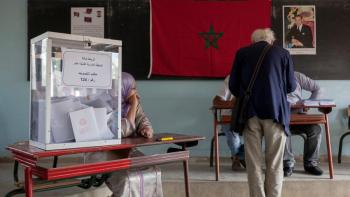 October 7, the day of parliamentary elections in Morocco, was relatively calm, compared with the previous days, at least.

The election campaign had ended at midnight, but the streets of the capital were still covered with leaflets.

Most are marked with the logos of the two main contenders: the Islamist Justice and Development Party (PJD), in power since 2011, and its "modernist" rival, the Authenticy and Modernity Party (PAM), deemed close to the monarchy.

On the ground, 4,681 Moroccan and foreign observers discreetly oversaw the election; their role essential for the democratic process.

Since the beginning of the campaign, they monitored electoral rallies and potential "supporter-buying" and were present at the polling stations. They attended the counting of votes and the announcement of the official results to indicate possible fraud or irregularities.

In front of Rabat's Moulay Youssef high school, Barnabe Lopez Garcia, a Spanish election observer from the Political and Electoral Observatory of the Arab and Muslim World (OPEMAM), consults with his three colleagues.

The team is focused. The political science scholars have much to do.

They have already been in nine polling stations, in two different schools, and still have seven more establishments to visit.

The OPEMAM, an association dedicated to independent research, is set to publish analysis in English and in Spanish about the election. "We also have representatives in Al-Hoceima and Meknes," Lopez Garcia says.

The Moulay Youssef high school, located in the central administrative district of Rabat, was one of the most scrutinised and monitored polling stations in Morocco. Television trucks of international broadcasters parked in front of the main entrance, while journalists struggled to interview each voter or observer getting out of the rooms to decipher the first voting trends.

Then he goes to the representatives of the political parties to determine which of them made the effort to be represented.

"And if there is something odd, we write it down," says his colleague, Immaculada Smolka Vida, a professor of comparative politics at Grenada University in Spain.

"For example, there are representatives of political parties who are paid to be there, not [hardcore supporters]... They don't even know the names of the parties they represent, but only their logo."

After repeating their procedure in other polling stations in the high school, the team heads out. Smolka Vida stops.

"We must take a picture, this is the first time we see people queuing to vote," she says to her colleagues with a roguish smile.

A few kilometres away in Rabat's Nahda neighbourhood, the atmosphere is much noisier in Zerktouni college.

The college is a big concrete building straight out of the 1980s, with a green courtyard surrounded by childish graffiti.

After showing their observers' badges, the OPEMAM team enters classrooms on the first floor of the building. Many young men are stationed against the walls in the stairs, next to the rooms.

It is difficult to know who they are and what their role is.

"I am an observer... Employed by the commune of Rabat-Salé. We count people, they show us their national card," says one.

Another young man arrives. He tries to help his comrade detailing their role. They contradict each other, saying initially that they are working for the Wilaya [provincial level authority], but ultimately admit being paid by a political party, the PAM.

Politics do not interest them. They are there, above all "just to make money".

Despite the change of conditions, the observers' procedure does not change. At the entrance of a polling station, Smolka Vida is stopped by a man wearing a djellaba and a white beard. He noticed she was an observer and wants to report to her what he considers an irregularity.

The woman from the polling station reception, responsible for checking the identity cards, had, he says, heavily encouraged him to vote for "the tractor party" [the PAM].

Smolka Vida notes the incident and explains the procedure she will follow: "We do nothing at all [immediately]. We are an institution, we can not intervene... For example, I'm not going to refer [this incident] to the president of the polling station. We can put a note [in the report] but I do not know if what this man said is true."

Lopez Garcia adds: "In the observation we do, in approximately ten voting stations, we didn't find real irregularities... In rural areas, it can happen differently, with blatant manipulations."

Now a retired professor of history of the Arab world, Lopez Garcia has been observing Moroccan elections since 1979. At the time of Hassan II, father of the present king Mohammed VI, "absolutely everything was rigged", he says.

"But since the coronation of Mohammed VI [in 1999], there has been much less election rigging."

The real turning point happened in 2011, during the Arab Spring. That year, the street protests carried out by the February 20 movement led Mohammed VI to make some concessions.

A new constitution, giving more powers to the government, was adopted. Early parliamentary elections took place, resulting in a historic victory for the PJD. And the king created the National Council of Human Rights (CNDH), which is now responsible for accrediting election observers.

"The 2011 elections were the first where there were many international observers," says Lopez Garcia.

But not all conditions are met to ensure transparency and integrity of the vote. In Morocco, there is no independent body supervising the elections. They are organised by the Ministry of Interior, which mainly takes its orders from the palace.

Moreover, despite the changes brought by the 2011 constitution, there is still no effective separation of powers, with many decisions being made by the king.

"Nonetheless, there exists some interesting leeways [for the government], and this is precisely the stake of this election," says Lopez Garcia.

At seven in the evening, it is time for the polling stations to close. However, the mission is not finished for the OPEMAM observers. They have to watch the counting of the votes, and plan to attend the official announcement of the results at the Ministry of Interior, the next morning.

The PJD eventually won the parliamentary election for the second time in a row, with 125 seats out of a total of 395, against 102 seats for the PAM.

Despite harsh criticism from the PJD, which accused officials of having favoured the PAM, Minister of Interior Mohamed Hassad described the elections as "transparent". For his part, the president of the CNDH, Driss el Yazami, stated that the election happened "in a climate... of freedom, sincerity, transparency and neutrality", and that "irregularities... do not substantially diminish the credibility and integrity of the poll".

The international observers sent by the Parliamentary Assembly of the Council of Europe also reported positively on the election.

However, they recommended the creation of an independent body for the monitoring of the elections, and expressed concerns regarding the low level of participation.

Among the 15.7 million Moroccans registered on the list of voters, only 43 percent turned out to vote. And the presence of election observers and the recent but slight political liberalisation are not enough to convince the rest of the Moroccans to go to the polls.

In the Hassan district of Rabat, in front of the Lalla Aïcha high school, a young man watched the voters going in and coming out. "Why should I vote?" he asks. "This is only a theatre, these people do not represent me. Everything is already decided."

Perrine Massy is a French freelance journalist who has been based in Tunisia since 2013. She has worked for several Tunisian media outlets and co-founded the Tunisian web magazineInkyfada.org. Follow her on Twitter: @PerrineMassy

Sebastian Castelier is a photojournalist specialising in the MENA region. Follow him on Twitter:@Scastelier