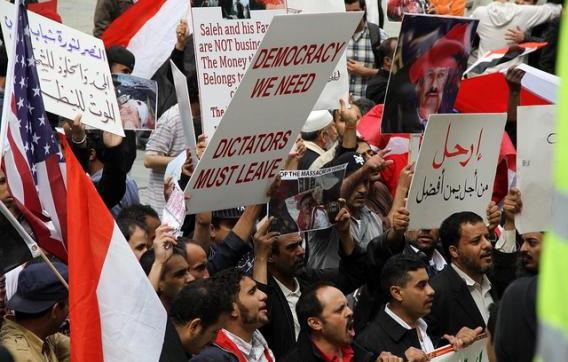 On February 6th the starting date of Yemen's National Dialogue Conference was announced. March 18th 2013, a symbolic date if we take into account that it will be the second anniversary of the 'Friday of Dignity' massacre in which 52 demonstrators calling for the downfall of the over three-decades-old Saleh regime were killed. That massacre led to a massive wave of resignations and desertions which substantially altered the balance of power during the Yemeni revolution and was instrumental in the evolution of events: the signing of the Gulf Initiative, the transfer of power agreement between Saleh's party and the main opposition party platform.

By choosing this date, March 18th, the new government seems to be making a nod to the youths who sparked the revolution. However, the majority of these youths do not agree with the Gulf Initiative and reject the National Dialogue. Their position is clear: as long as the ex-president retains immunity reconciliation is unviable, and as long as the the revolution's demands remain unmet, the revolution has been hijacked by politicians and by the international community.

The government's efforts to involve young people in the Dialogue are insufficient: the proportion of youths taking part in the Conference is just 20%. In a country where almost 75% of the population is under the age of 25 this quota is excessively low. In the last few weeks of February, Yemenis witnessed an increase in the number of protests demanding attention to the revolution's victims: a group of injured people camped outside the government buildings announced a hunger strike. One man set fire to himself demanding a second revolution to complete the first.

The government is trying to involve young people but it is doing so without listening to their demands and, even worse, without either attending to the victims of the former regime's repression or judging those responsible. It is no surprise then that young people are feeling marginalised. They were left out of negotiations of the Initiative and two years later are still being ignored. One of the most widely published images on social networks over the last few days shows a victim of the 2011 repression holding a banner with the words: “[the government] rose on our blood and we beg them for medical treatment”. Given the circumstances, beginning a National Reconciliation Dialogue on March 18th is no homage to the victims, but rather an attempt to rob Yemen's youths of their Day of Dignity. Dignity which the new authorities are not succeeding in restoring.