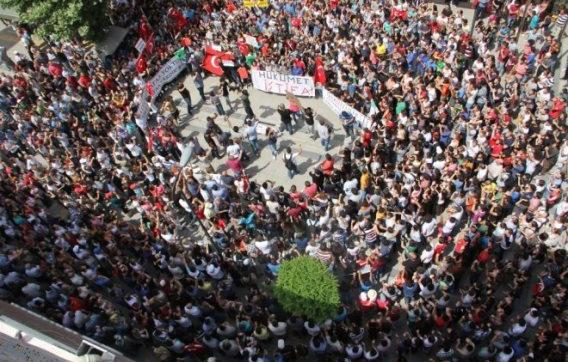 The battle for Taksim which has spread across across Turkey in recent days is being waged economically and politically. Taksim is, after all, the hub of Istanbul's European side and a highly symbolic place both collectively and politically. The square is linked to the pedestrian Istiklal Street and its iconic tramway which on weekends fills with crowds from every part of the city and different countries around the world. Taksim and Istiklal draw political demonstrations as well as more popular celebrations.

The urban reforms affecting the buildings along Istiklal and especially the square, represent a radical change to a cityscape loaded with symbolism for Istanbulites. In fact, in just a short period of time the whole city of Istanbul has been undergoing a major transformation, which has promoted the construction of skyscrapers and imposing shopping malls, while leading to the gentrification of these areas and the corresponding expulsion of the less well-off classes to the periphery.

The remodelling plans for Taksim, drawn up before the protests, favoured the construction of another shopping mall which would again exclude the working class and benefit instead luxury tourism coming from the Gulf countries. Next door to the mall, the project included the construction of a mosque, which is considered by many to be a symbol of revenge against the strict secularism of the Kemalist legacy. Be that as it may, the urban plan encouraged the depolitisation of the square, as well as the loss of the popular flavour it has always had – both of which are reflections of a specific type of economic model.

Politically speaking, the AKP, which referred to itself as a conservative-democratic party at the beginning of its first term in office in 2002, has become the dominant party of the Turkish political system, giving it three consecutive absolute majorities in parliament. Whereas once it was capable of displaying a real momentum for reform, of opening negotiations with the EU, and of favouring a climate of change and political opening, in the last few years - for reasons both internal and external (here it is worth mentioning the negative of EU member states towards Turkey's candidature) - the party's rhetoric and strategy have changed. Proof of the erosion of the democratisation process is the increasingly worse position Turkey holds on international ranking of freedom of expression. The limits imposed on how opposition to the government can express its discontent, as well as the passing of legislation such as that restricting the consumption of alcohol, have caused enormous concern among important segments of the Turkish population. Following the protests, the Turkish president Abdüllah Gül declared that the message had been heard, that democracy does not only mean elections, and that a democratic country should allow different lifestyles to coexist.

For his part, Prime Minister Tayyip Erdoğan has seen his image seriously damaged both internally and externally by the brutal clampdown on the protests. This will no doubt be a turning point in which the Turkish government will opt either to use greater repression – be it formally or informally – or instead be sensitive to the demands of groups who do not feel represented by the ruling party. The 2014 local and presidential elections, as well as the subsequent general elections, will allow us to measure the impact of these protests in the medium term.