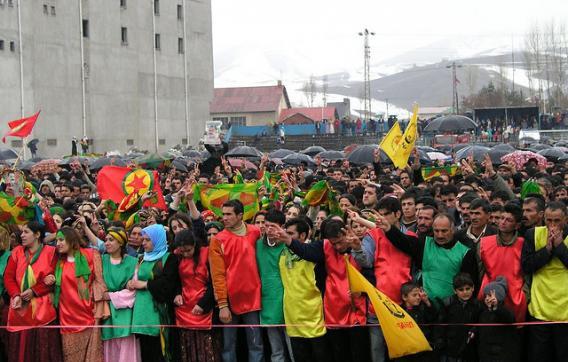 Nevruz, the commemoration of spring's arrival, has special connotations in Turkey this year. On Thursday 21 March, Abdullah Öcalan, leader of the PKK (Partiya Karkeren Kurdistan, the Kurdistan Workers' Party) – labelled a terrorist organisation by the United States and the European Union – announced a ceasefire and called for the PKK's withdrawal from the country.

The ceasefire comes after the liberation of eight Turkish hostages captured between 2011 and 2012 that had been held by the PKK in northern Iraq and who were freed at the beginning of March.

These steps form part of the peace process initiated between Abdullah Öcalan and the Turkish government in October last year, and made public at the beginning of 2013 amid high expectations. Although different sectors of Turkish politics have been cautious about the process, there are a series of characteristics that distinguish this attempt from previous ones. On the one hand, the decision has the prime minister's support. Tayyip Erdoğan announced that his government would be willing to drink hemlock if that would bring peace to the country. The leader of the main opposition party, the CHP ( Cumhuriyet Halk Partisi, Republican People's Party) Kemal Kiliçdaroğlu has also demonstrated his party's support for the government's effort, as has the pro-Kurdish party, the BDP (Barış ve Demokrasi Partisi, Peace & Democracy Party). The only party to openly come out against it has been the ultranationalist MHP (Milliyetçi Hareket Partisi, Nationalist Action Party).

Members of the government, such as Tayyip Erdoğan himself or the deputy prime minister, Besir Atalay, have reiterated that the new phase initiated has the support of a significant segment of public opinion.

The assassination of three Kurdish activists in Paris in January and the leak of a conversation recorded between Öcalan and three BDP MPs that took place on Imralı, the island where the PKK leader is imprisoned, threatened to endanger the whole process. In the leaked conversation, published by the daily newpaper Milliyet, Öcalan threatened to bring about a war if the Turkish government did not continue along the path taken.

While the conditions for a durable solution are better than ever, this does not prevent us pointing out the huge obstacles that will face the different sides involved in the process along the way. Aliza Marcus in The New York Times detailed the problems for Öcalan himself, who will have to prove that his approach and proposals will be respected by leaders of the organisation located outside of Turkey. Meanwhile, Öcalan's personal expectations are as yet unknown. In spite of his position of leadership among the Kurdish population, the vast majority of the Turkish population views him as the terrorist responsible for the 35,000 victims caused by this long conflict. Will the process lead to new prison conditions for Öcalan? What role will he have in the future political configuration of Turkey? These are some of the question marks that have arisen from recent developments.

For their part, the government and the main political parties need to be capable of engendering the widest possible consensus in preparation for the difficult decisions that will arise in the future.

More than ever before, the Kurdish question is now on Turkey's table. It is undoubtedly such an important issue that it will affect the country's entire democratisation process. The new constitution will be testament to this. In any case, the spring that is now beginning, like all those before it, isn't here to stay. The parties involved in this process will need to make an intense effort to find a solution that can last.